How the strange man lost his wife to the image 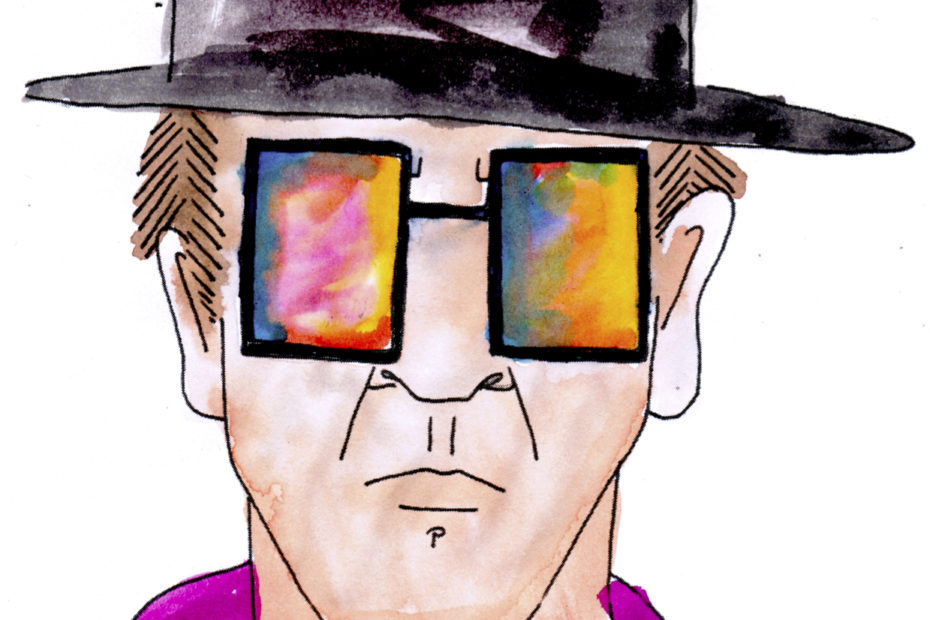 How the strange man lost his wife to the image

That night, it was the type of night rain was splashing downwards lacking real objective. I was the exact same. I was sitting at the bar drinking gin tonics without any goal. Just sitting there, staring into nothing, exchanging empty words with the barman, who really just wanted to play with his phone The music was dull and uninspiring, half-assed electronic-ish pop music with lyrics heard a million times before. The bar was almost empty, the bathroom sink flooded and it reeked of mold and stale cigarettes. It was as if the creator of this world had decided to take a picture in black and white, but forgot to use a camera. The night was ready to be thrown into the pool of ‘horrible drunk nights where nothing happened and could easily be forgotten’, when next to me came sitting a rather peculiar looking man.


He wore a purple trenchcoat, a leather hat and huge sunglasses. The ear that was right next to me showed a fluorescent green earplug. It was time to go. I was looking for some money in my pocket, when the man shook his head and said, ‘now just wait you young lad, I’ve got a story for you.’
This annoyed me to great heights. Why, of all the empty seats in the bar, did he have to pick the one next to me, right when I decided I was done for the night?
‘Sorry, I’m leaving. Gotta feed the cat,’ I said. But as I’ve told you; the evening was coloured by pastels and everything lacked conviction. My excuse sounded lame and half baked. If someone had said it to me I would have laughed and said.. well, nothing. The man was not impressed, he raised his finger and shouted, ‘one Goldstrike, and what is this boy drinking? Gin tonic? Pah! Two Goldstrike!’ He then hit the table with his hand, turned his head towards me and stared into my eyes. Or at least I think so, since the glasses prohibited me from seeing his gaze. Silence reigned, I dared not to leave my seat, caught by the two black holes in his face. The barman dumped our drinks on the bar and uninspiredly said, ‘eh, your drinks then,’ and returned to his phone world.
Out of habit I took a sip of my drink. I did not think, I just downed the odd cinnamon spiced liquid. A pause- the man smiled. What was he smiling for? And with dismay I realised that I had accepted the drink, and with the drink the story, and with the story an even bigger waste of time.


The man shook his drink from left to right, causing the obscure liquid to tornadofy. ‘Pah! I’m glad I can see you. You can never tell these days, you know…’
Well, I didn’t. He did not seem to need an answer though, and with a big sigh took a sip of his drink. Then, as if rushed by the importance of his thought, lowered his voice in secrecy and asked,
‘Do you think I’m crazy?’
I took another sip. Looked at him thoroughly, his leather hat was covered in little raindrops, the coat showed streaks of darker purple where the wetness hit. He might have been 50, maybe 60. It was hard to tell due to the fact that I could not see his hair and most of his face was covered by either glass or hat. And those glasses… They were of a kind I had never seen before. About the size of the handpalm of a large Asian woman, completely square, black as ash and with rainbow effect- reflections. I saw myself in his glasses; my eyes squinted with suspicion, rolling over the physical features of the man seated next to me. He looked absolutely mental to me. One of the more important lifelessons I’ve learned is that whenever somebody asks you whether you think he or she is crazy:
1. the person is always crazy
2. you can not by any means tell the person
Then, there are a few rules concerning crazy people.
1. Do not ever lie to a crazy person, they can smell this and will create mayhem.
2. Do not look them in the eyes, they will absorb your mindpower and drain your saneness in a pit of darkness.
Therefore, my cunning reply was: ‘The question is not whether you are crazy or not, the question is: what is crazy?’ He did not move and kept on staring at me from behind those glasses. Then he laughed:
‘Yes! You are ony of my boys. I can see that you have the vision. I can see that you are one of those ready to see what I see,’ he smiled almost viciously. His mouth showing a surprising set of straight, pearly white teeth. I did not respond at all, this man was bogus. A hotdog, a fried chicken that returned to live,  a schizoidparapsychoborderlinelocopath. So I took a sip instead, slightly knocked back by the strength of this drink.
‘LAD!’ he shouted. The barman even looked up from his cellphone. In my surprise I choked on my drink and started coughing. He did not care.
‘Are you ready?!’ as my eyes teared up I nodded with great power. Please let this man stop shouting.
‘Are you!?’ he moved his head closer to me, his hands on his lap, his ass on the edge of the seat. What for? I did not even dare to ask.
‘Yes!’ I coughed miserably.
‘Yes, I’m ready.’
He smiled again.
‘Good, then we can start. You might find me a strange fellar, but I can assure you that everything, however strange, is true. You might not believe me at first, but hell. That’s your choice! Let me tell you where it all started. Or no: better turn it around. I’m telling you the story of how I lost my wife to the images.’

Piece performed at Tales of a Dirty old Man (Amsterdam).